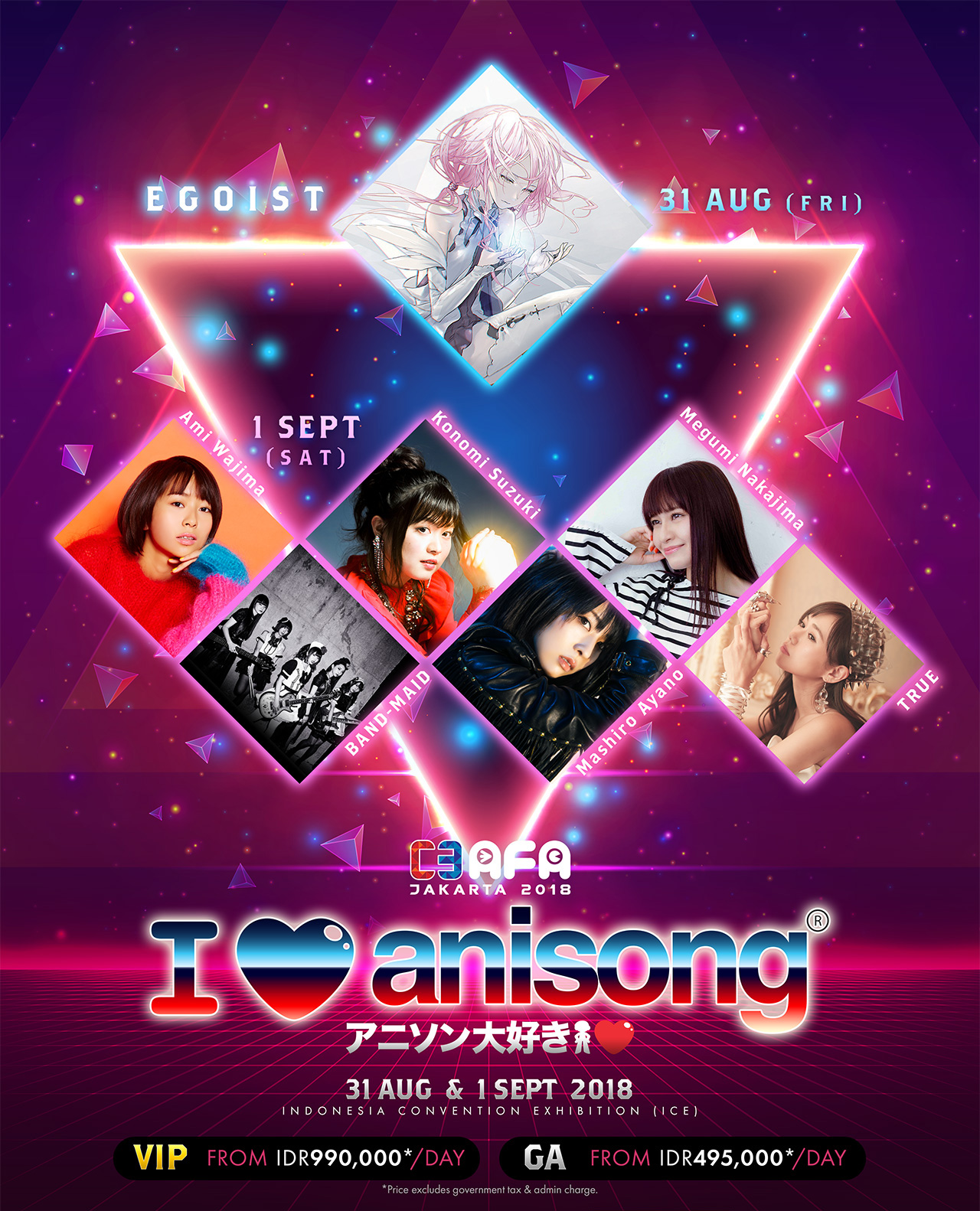 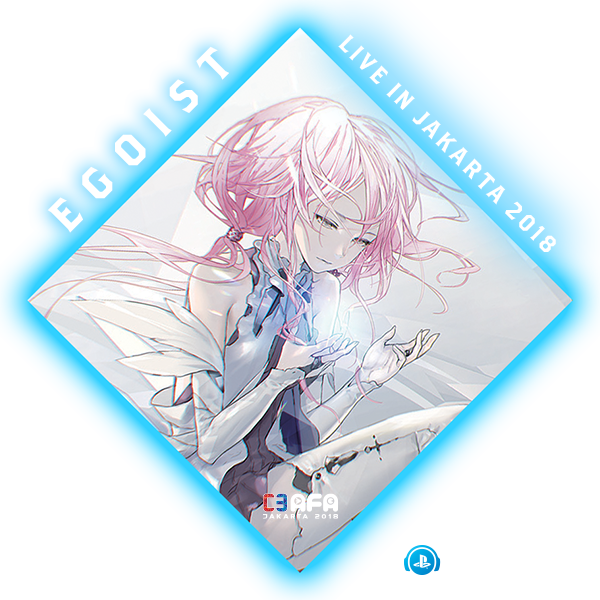 Born out of the TV anime “Guity Crown”, EGOIST is an artiste produced by ryo (supercell)

At first being the heroine of the TV anime “Guilty Crown”, Inori Yuzuriha was part of a unit in the anime, and is now actively performing in the real world.

All their CD releases to date have achieved the TOP10 on the Oricon Weekly Charts.

Venturing out of the “Guilty Crown” anime, EGOIST has performed the theme songs for numerous other animation series including 2 seasons and the movie adaptation of “PSYCHO-PASS”, Noitamina Movies “The Empire of Corpses”, “Genocidal Organ” and “Harmony (Project Itoh)”, “Kabaneri of the Iron Fortress” and most recently, “Fate/Apocrypha”.

Unit producer ryo (supercell) collaborated with countless illustrators and designers to create the unit known as supercell, which has received explosive praise from fans, with over 20,000,000 replays on video site niconico douga.

EGOIST’s vocalist chelly, is a songstress diva who was handpicked from a pool of over 2,000 potential candidates.

One of the greatest features in their live performance is the use of the latest motion capture technology. Not just within Japan, but even holding solo performances in many overseas countries including Hong Kong, Singapore and Taipei. Their global popularity continues to grow! 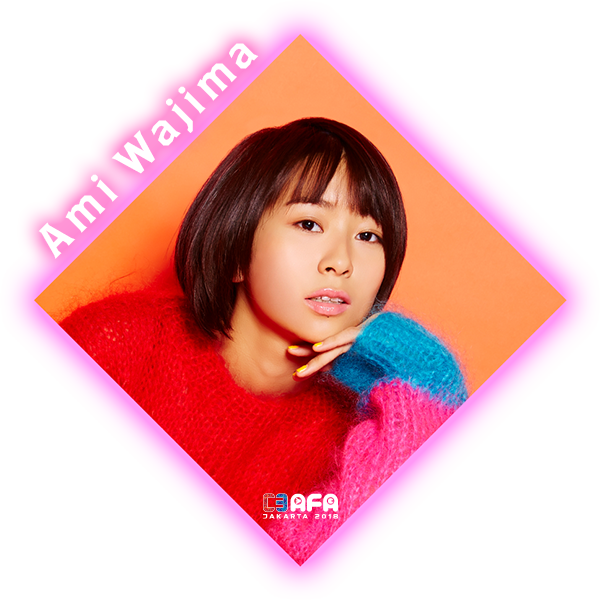 Ami Wajima won the HORIPRO×PONY CANYON Next Generation Anisong Singer Audition in 2016 and debuted with “Genso Drive”, the opening for the TV anime series Mayoiga, in May 2016. She released her second single “Eien Loop” in August 2016, which was the ending theme song (Ending 2) for the TV anime series “Kuromukuro”. On February 22, 2017, Wajima released her first album “I AM”. She has appeared as a guest in events overseas as well in countries such as China, the Philippines and Singapore, and is among the next generation of Anisong singers to keep an eye on. 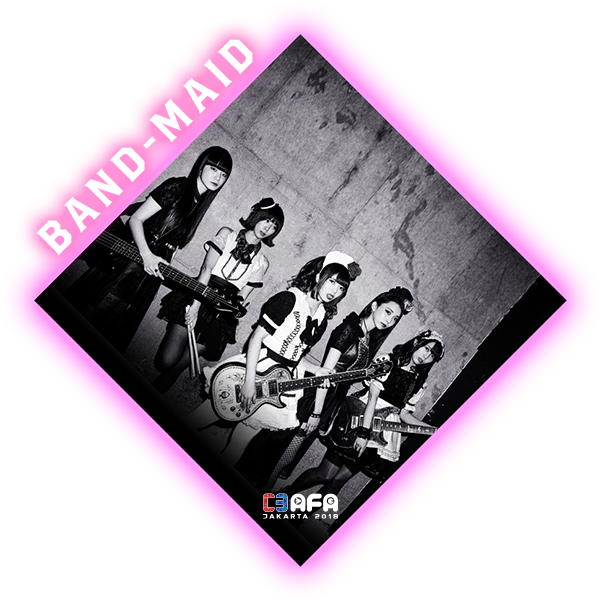 BAND-MAID is a rock band consisting of 5 women wearing maid outfits in achieving world domination.
Kobato Miku(Gt./Vo.) who used to work at a maid cafe in Akihabara came up with the idea to fuse the word “MAID” and “BAND” in July 2013. She then recruited a guitarist, bassist and drummer to form BAND-MAID. In the same year, Saiki (Vo.) joined the group and became a two vocal band.

～A concept that seemed to have existed but didnt: A hardcore maid rock band～
They refer their concerts as “servings” and their audiences as “masters” and “princesses.” In contrast to their maid world looks, they play hardcore rock music using their performance skills as weapons, they continue to fascinate their audience.
In 2015, their music video Thrill was introduced on an EU music website which attracted attention and fans world-wide.
In 2017, they had a rise in popularity in Japan as well, and started their first “one-man” tour at 6 different locations in Japan (8 concerts) which were all SOLD OUT. They also performed at some of the biggest rock festivals in Japan such as SUMMER SONIC and RISING SUN ROCK FESTIVAL.
They released their 2nd major album in 2018 causing a BAND-MAID sensation world-wide. Don’t take your eyes off the maid’s who will surely have a major break-through in 2018. 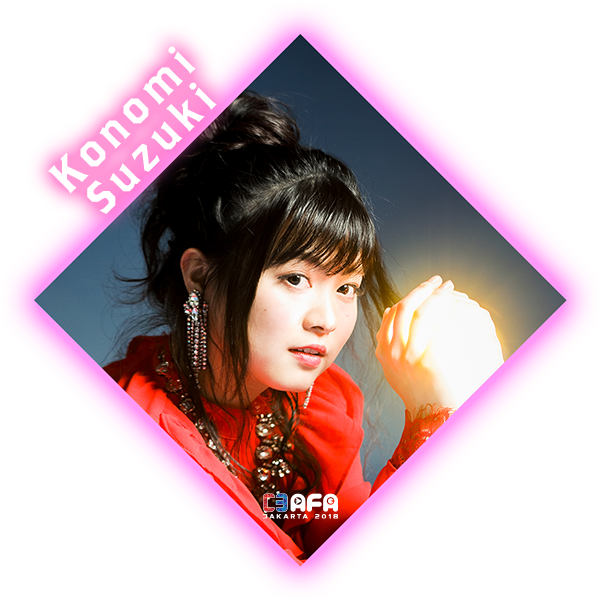 The winner of the Animax Anison Grand Prix, Konomi Suzuki made her debut with the song “CHOIR JAIL” (lyrics produced by Aki Hata), when she was 15 years old. She made six consecutive appearances at the biggest anime-song festival in Japan, ‘Animelo Summer Live’. 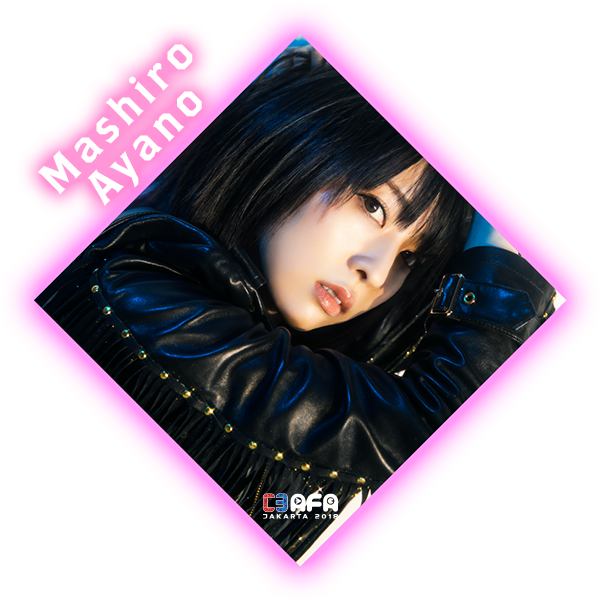 With a resolute voice resounding with clarity, her songs and messages reaches and grabs the listeners’ hearts. In 2014, Mashiro made her debut with the opening theme song, ‘ideal white’, of the television anime, ‘Fate/stay night’. After that, she has also sung the theme songs of many other television anime such as ‘Gunslinger Stratos’ and ‘D.Gray-man HOLLOW’. Other than performing at live events in Japan, she has also visited overseas countries such as Singapore, Los Angeles, Germany, and Taiwan. In October 2016, she released her 1st album, ‘WHITE PLACE’. This year, in May, she released a single, “Shoudou”, which was chosen to be the ending theme song of ‘Record of Grancrest War’. She will also be holding a One-man Live, ‘PARAISO’, and ‘YOUR WORLD’ soon. 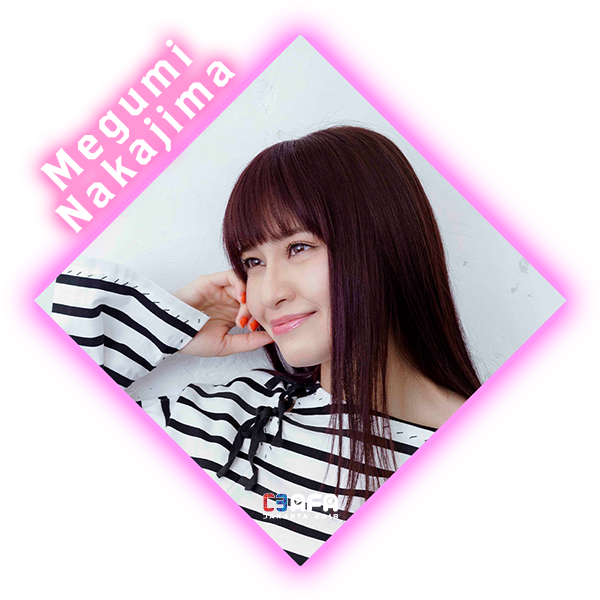 After winning the top prize at “Victor Vocal & Voice Audition” in 2007, Megumi made her debut as a voice actor and a singer with the TV animation “Macross Frontier”. In the series she played the role of Ranke Lee, and sang many songs including “Seikan Hikou”, which went No.5 on Japan’s Oricon single chart.

She started to release songs under her name with the single “Tenshi ni naritai” in 2009, and has released 11 singles so far including “Try Unite! (opening theme for “The Flower of Rin-ne”)”, “Watashi no Sekai (ending theme for ” Fuuka “)” and “Saturday night Question (opening theme for “Recovery of an MMO Junkie”)”, and 4 albums including “Curiosity” which came out this year. In 2009 she won a prize for the best singer category in “The 3rd Seiyu Award”.

As a voice actress she plays many heroine characters such as Ruri Aiba for “Sacred Seven”, Yuzuki Eda for “A Town Where You Live”, and Megumi Aino & CureLovely for “HappinessCharge PreCure!”. Recently she made a guest appearance on “Violet Evergarden” as Charlotte Eberfreya Drossel. 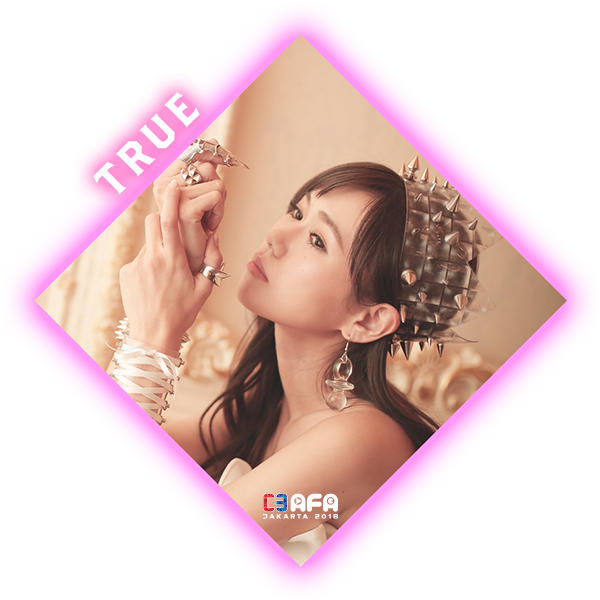 She started her singing career with a single produced by Satoshi Shimano, “anytime, anywhere”.

In March 2001, her third single “Way to Love” was chosen as a drama theme song and was a smash hit selling 300 thousand copies.

The song「Beat Generation」performed by Fairies, which she wrote, won the ‘Excellence Award’ in the 45th Yu-sen Taisho.

Her lyrics are highly praised by many fans, as it holds close and uniquely identifies to each of the pieces.

In 2014, she restarted her career as an artiste, TRUE.

From strong and intense music to grand ballads, she has a good command of the various singing styles..

In 2018, TRUE is welcoming her 5th year anniversary, and in April, she has released her 3rd album, “Lonely Queen’s Liberation Party”.